Linux at the beginning only had Command Line Interface (CLI). Over time, Linux begins to have a Graphical User Interface (GUI).

What is Zorin OS

Zorin OS is one of the main Linux distributions out there that serves an audience beyond the traditional Linux nerd subset. Zorin OS is generally one of the more direct efforts in the Linux ecosystem with options that are geared toward users of different levels.

In this specific case, Zorin OS is targeting those transitioning from Windows or who want a bit of both worlds. It should come as no surprise that Zorin OS is known for its slick and modern interface.

To reduce the high learning curve, now we have Zorin OS. From Zorin website, it said that:

“Zorin OS is a multi-functional operating system designed specifically for Windows users who want to have easy and smooth access to Linux.”.

By default, Zorin OS will have a graphical interface similar to Windows. Based on Ubuntu Linux which is the most popular Linux desktop across the globe, Zorin OS is trying to influence Windows users.

Here’s are some features that Zorin OS Lite has:

Zorin OS is divided into three versions. Pro, Lite, and Core. You can download the free Zorin OS Lite and Zorin OS Core versions from the Zorin OS website.

In this article, we are covering Zorin OS 16.1 Lite version for a 64-bit system. Once you have Zorin OS on the DVD or USB stick, we can start the installation.

In getting ready to install Zorin OS Lite 16.1 on your system, it’s important to configure your system BIOS. Ideally, you should Google “System BIOS for your computer model before proceeding with the next step in the sequence. Once you’re in your UEFI/BIOS settings, change your boot sequence to reflect the USB as the topmost device.

Now that you have the BIOS on the host system configured, it’s time to burn the Zorin OS Lite 16.1 ISO onto your USB drive. This will enable you to quickly boot from the USB drive so you can proceed with the installation process onto the host system as necessary.

On booting from the USB drive, you will be presented with options with start or start in failsafe mode. In this case, we’re going with the first option which will then take us to the boot screen options. 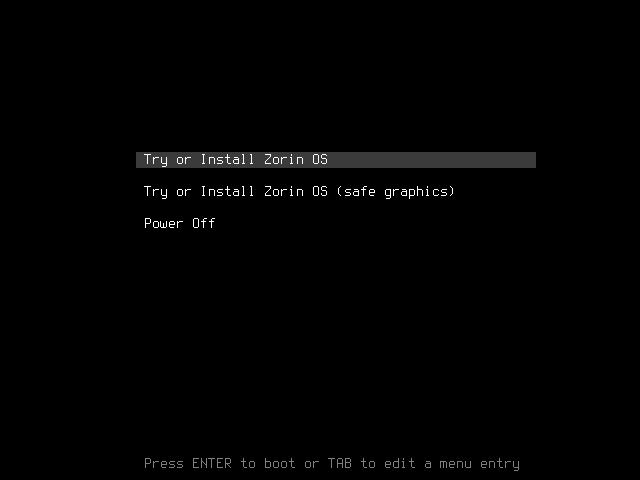 After waiting for a short time, you will see two options – Try Zorin OS or Install Zorin OS. In this case, I will choose the first option, which will take you to Live System. As you can see, the feel of its taskbar is similar to Windows although not 100% identical. 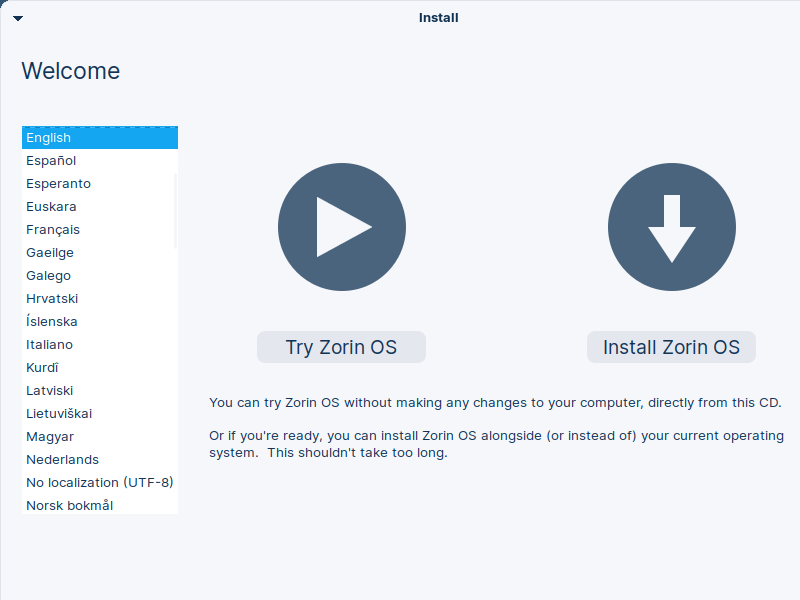 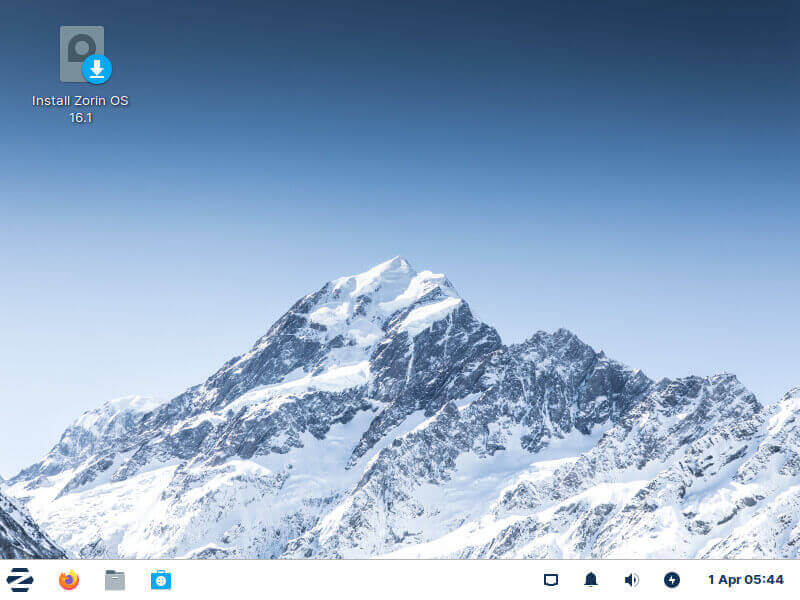 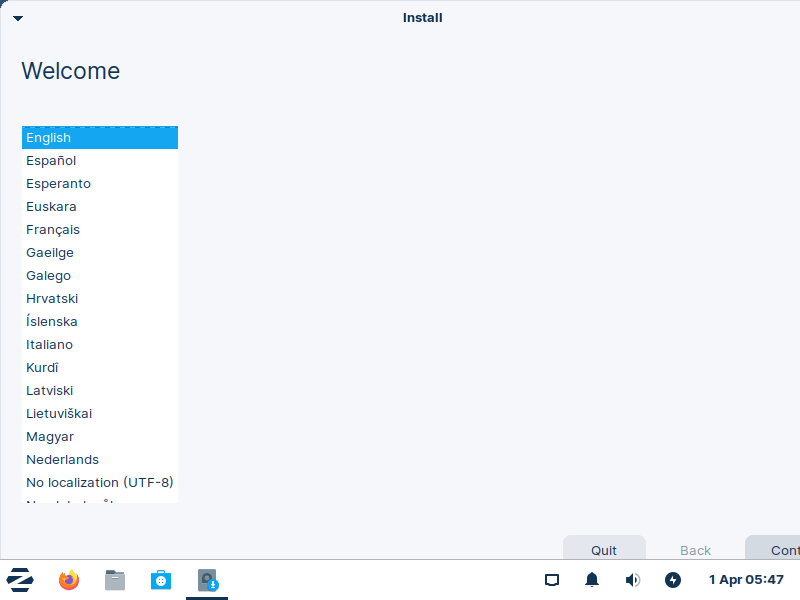 Then Zorin will ask you keyboard language. Just pick one. 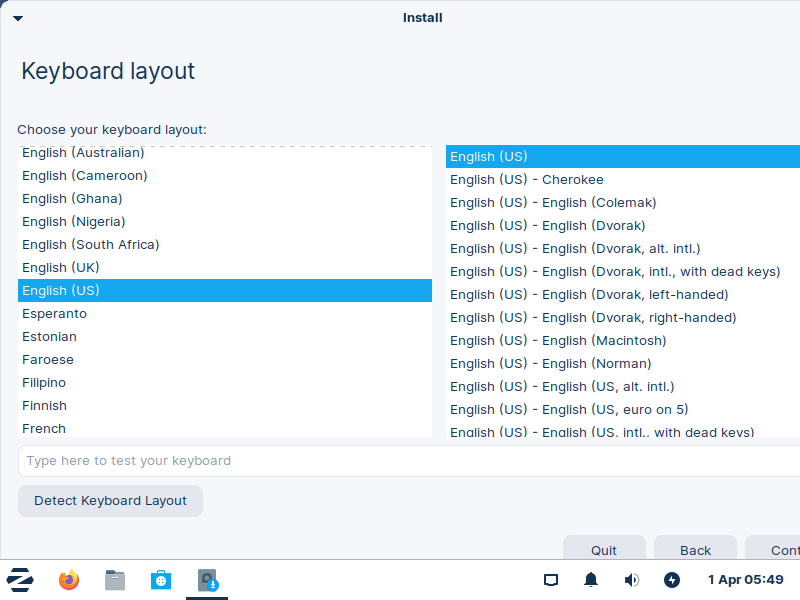 Next, it will ask you to install updates while installing Zorin OS. 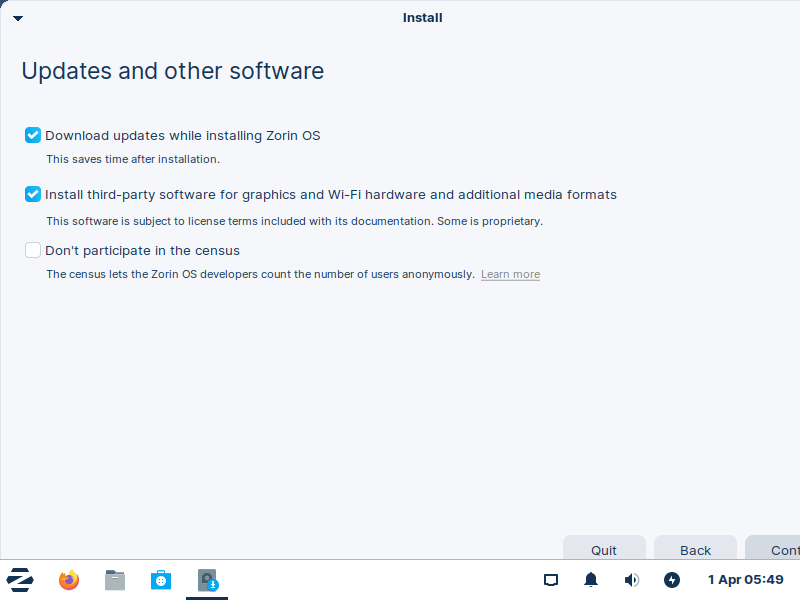 Don’t forget to choose the installation type. If you are a common user, the Erase disk and Install Zorin option is the best. But please notice that this option will delete any files on the disk. 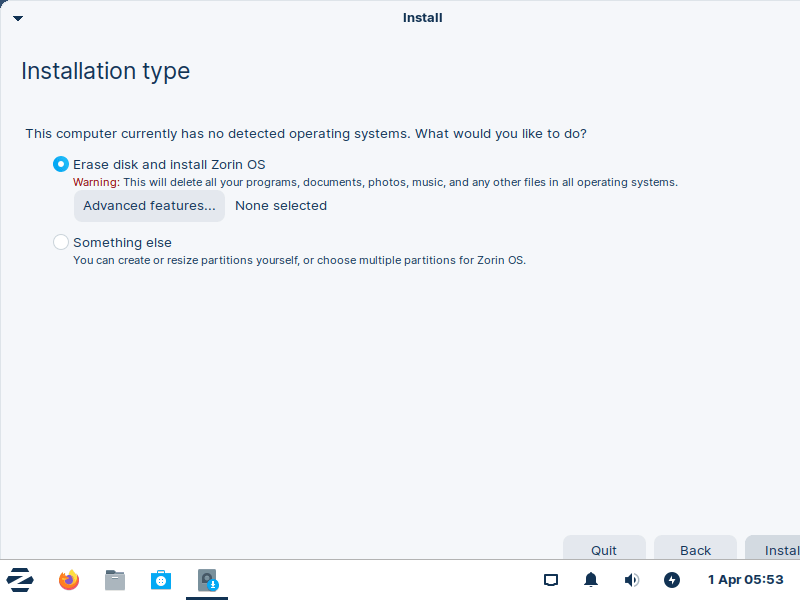 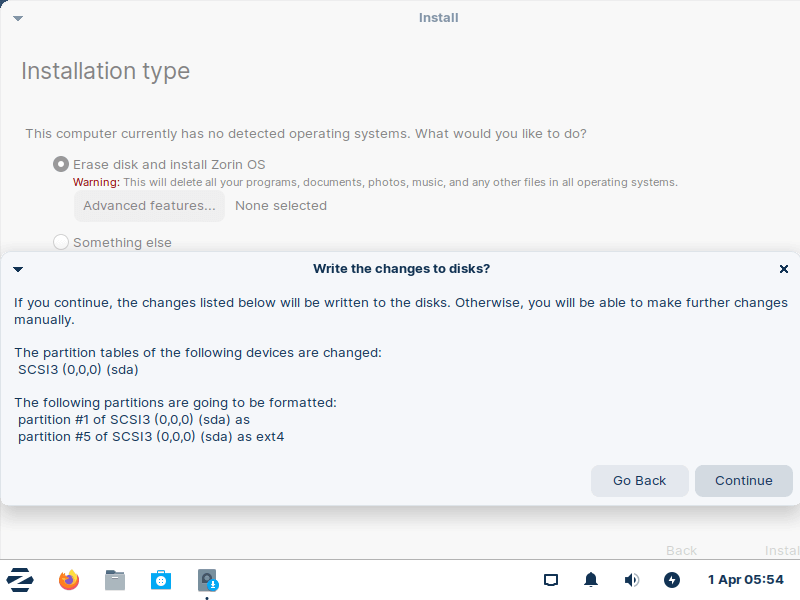 Next, pick your time zone. 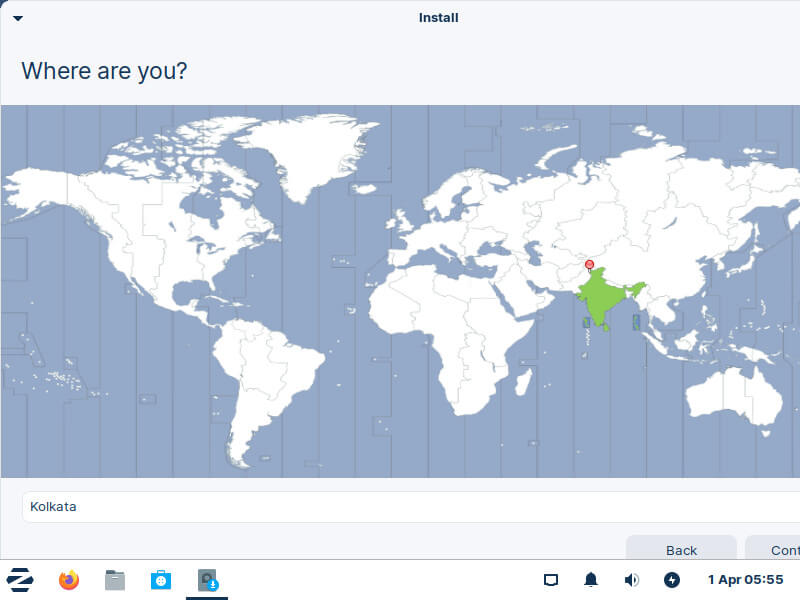 Enter your user detail. Even using a weak password is allowed, but it is not recommended. 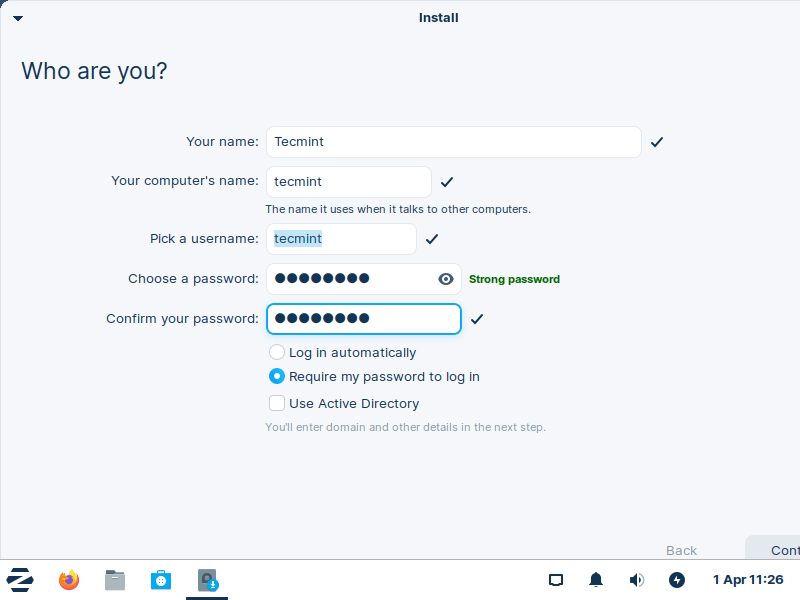 After that, Zorin will start copying files to your computer. 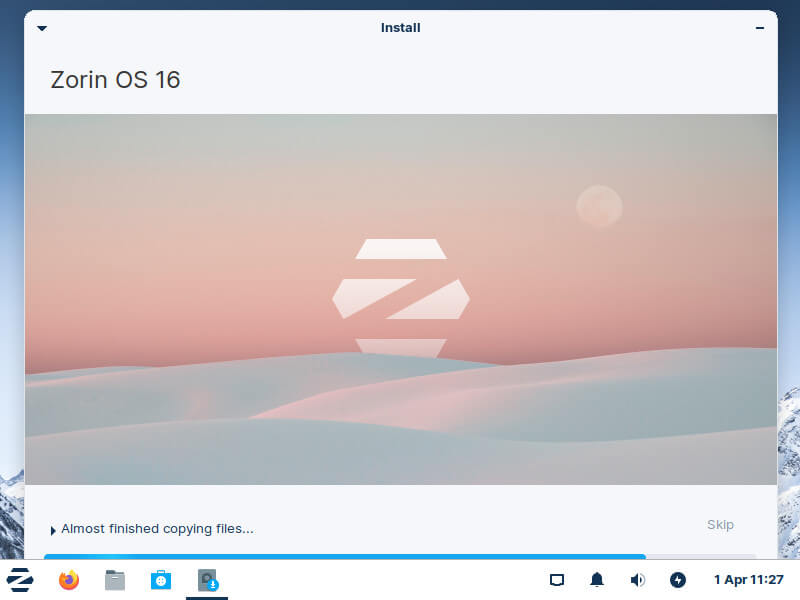 When it is finished, reboot your computer and remove the DVD / USB Stick.

There are a lot of advantages to using Zorin OS as a part of your Linux installation. First, it’s petite and lightweight. It doesn’t take much space on your hard drive. 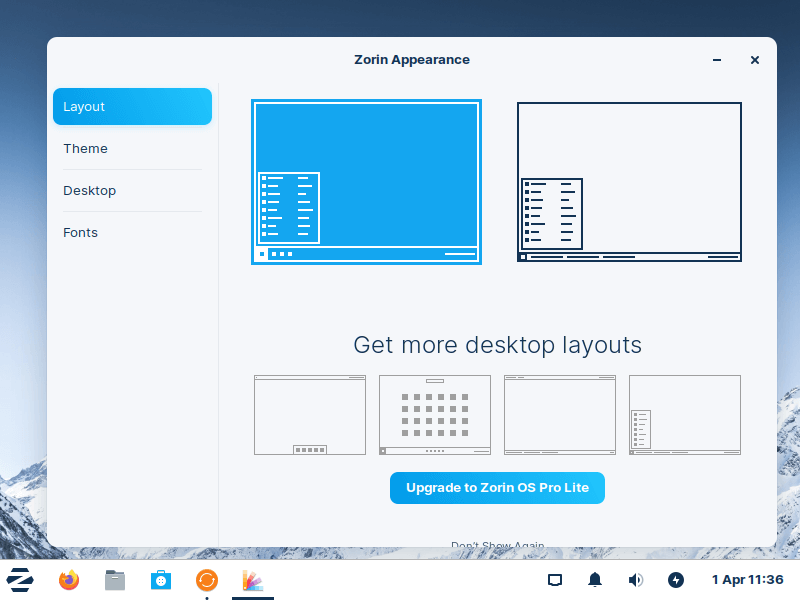 Second, it has a very simple installation process, which means you won’t have to waste time downloading files, installing programs, and updating software before you can get creative with the operating system itself. This is because you will be able to set up the entire operating system with just a few clicks. 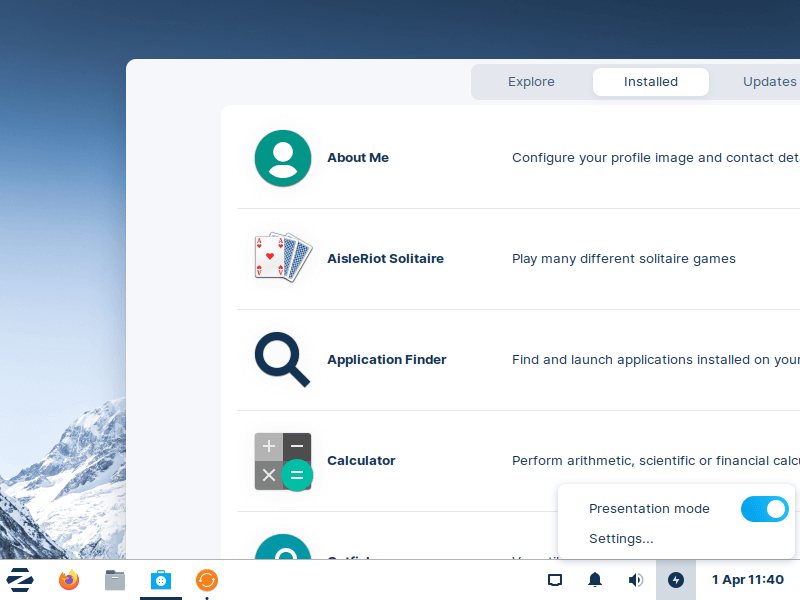 One of my favorite features in exploring the operating system is the Zorin appearance app that enables you to change the layout, themes, fonts, and overall desktop appeal. 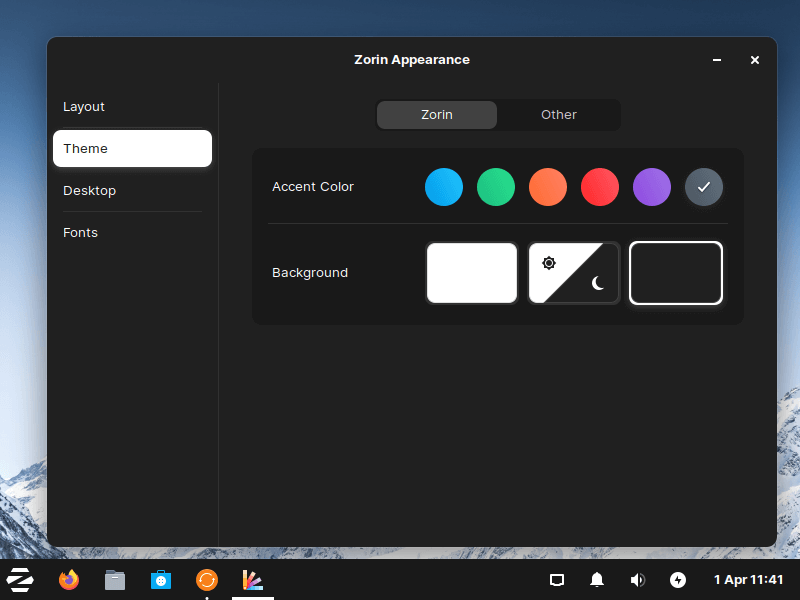 WIth a GNOME 3 or XFCE 4 oriented desktop, you can quickly grow accustomed to the Zorin experience especially if you’re coming from Windows. This is such that Zorin is particular about orienting its approach towards users from the Microsoft Windows demographic.

With a standard software repository and accompanying desktop optimizations, right down to the imitated blue accent around the operating system, there’s no question on who Zorin OS has its eyes out for.

As one of the few operating systems that was built from the ground up to win over Windows users, Zorin has been especially capable of expressing their disdain for Microsoft as a company while doing an equally fantastic job orienting their approach towards Windows users frustrated with the status of Windows as an operating system.

Additionally, Zorin OS is able to boast the kind of stability that may be foreign to some Windows users further validating the need to switch or making the users feel a bit more confident in their use of the platform post-switching.

A popular error that is often encountered by users irrespective of the version of Windows they run, is the infamous BSOD (blue screen of death). An unmistakably huge blue screen that takes over every single inch of your screen real estate. This is also nowhere to be found on Zorin OS.

Work as hard and play as hard cause no virus will be able to call your system home. There’s virtually no way for any Windows virus to thrive and the layers of security inbuilt (thanks to the Linux kernel) ensure that you’re at the mercy of superusers if there’s ever an illegal attempt to wrongfully gain access to your system. 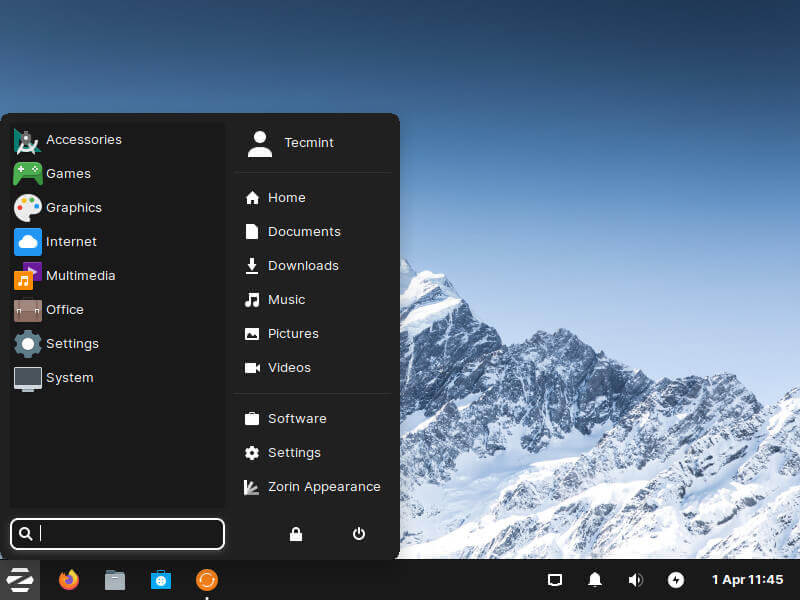 If You Appreciate What We Do Here On TecMint, You Should Consider:

TecMint is the fastest growing and most trusted community site for any kind of Linux Articles, Guides and Books on the web. Millions of people visit TecMint! to search or browse the thousands of published articles available FREELY to all.

If you like what you are reading, please consider buying us a coffee ( or 2 ) as a token of appreciation.

We are thankful for your never ending support.